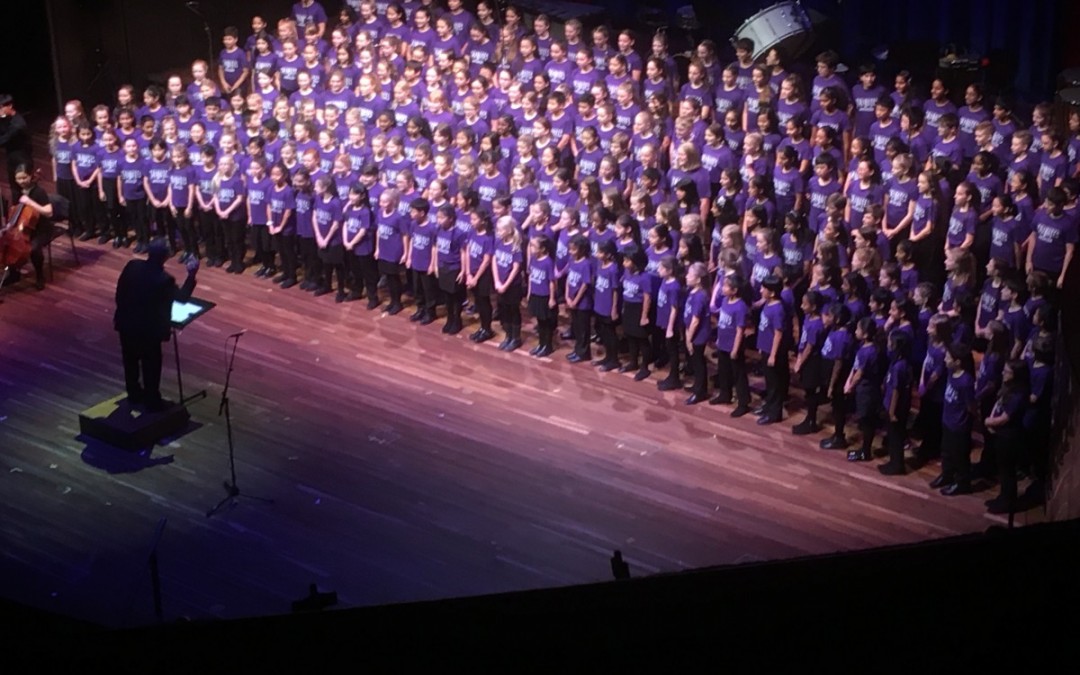 The great Hammer Hall in the Arts Centre Melbourne hosted ‘Tributes’, a special concert of school performers this week. Students from many primary and secondary schools in North East region joined in to showcase their musical talent and love of singing, including 25 fantastic ‘Leigh Club’ members from our school. Our singers were part of the large primary school choir of 300 beautiful voices, who did an awesome performance of four songs. There is no doubt that this will be a memorable experience for all participants, who were most fortunate to join in. Congratulations to our singers and their teachers, Mrs Kennedy and Miss Tapper, who worked very hard to make it all happen. The teachers and I in attendance thought the event was wonderfully entertaining and we felt very proud of our students. 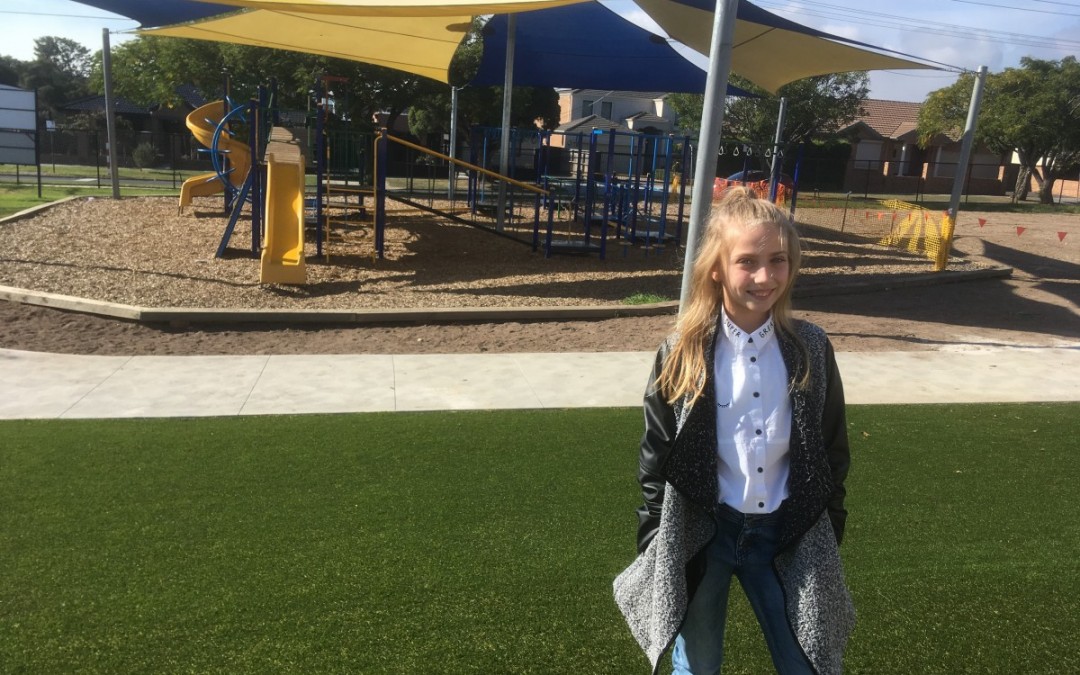 Principal for a Day

Monday 30th April was an exciting day for one Amsleigh Park Primary School student. After a very competitive election process, Miss Juliett was elected to be Principal for a day. This process only happens every two years, and it’s a great honour to win the right to undertake this role. After her assembly speech to the students, Miss Juliett visited junior school classrooms to inspect the learning and spread the message about not littering our school grounds. She also checked on some recent building works, and noted that the artificial grass was looking fantastic. Miss Juliett said she was very excited and honoured to be Principal for a day stating, ‘It’s been a great experience, and the kids at Amsleigh Park are so sweet and lovely.’ 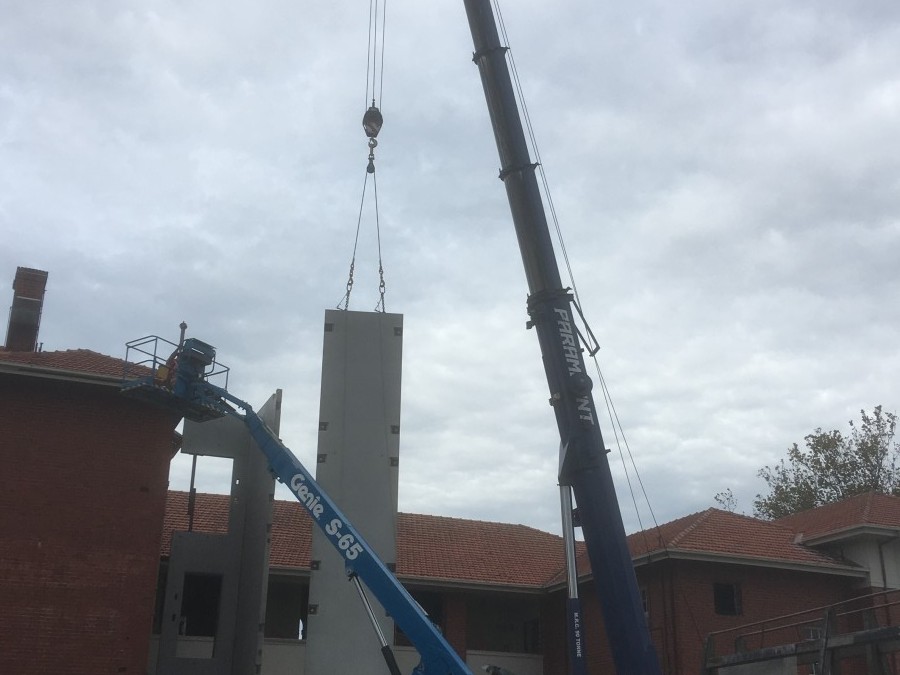 A large crane dominated the skyline at Amsleigh Park PS this week as the external concrete structure for our lift shaft was constructed. It was fascinating to watch the ease with which the crane lifted huge slabs of pre-formed concrete into place, with many students and parents eagerly watching the action. The skills of the construction team were also on show, and looking at the final result they did a great job. For anyone wondering, the modernisation of our main building must include a lift to ensure that we are compliant with standards outlined in the Disability Act. This lift ensures that anyone with mobility issues can fully access all areas within our school. A further example of this is the newly constructed ramp out the front of the Administration area. Works continue to modernise our main building, we’re very excited. 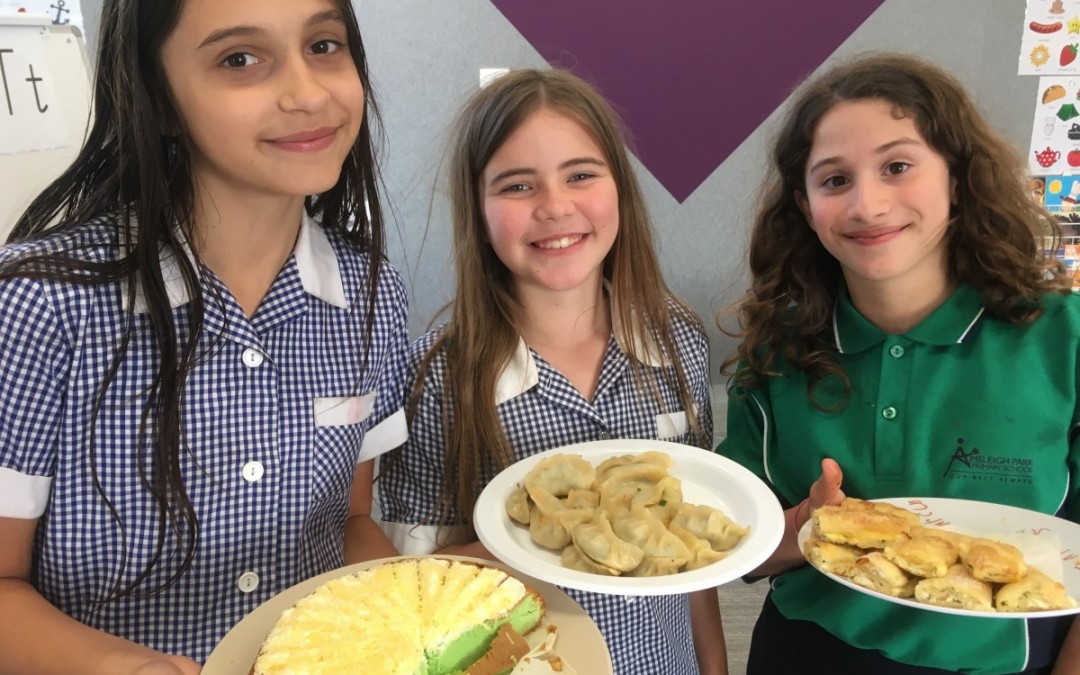 Our students enjoyed a feast for the mind and the taste buds to celebrate this year’s Harmony Day. This annual event, held all across Australia, is a celebration of cultural diversity, and is about inclusiveness, respect and a sense of belonging for everyone. This year our wellbeing team came up with the great idea to celebrate our diversity by asking everyone to bring in foods that represent their culture. Many families brought foods for our students and staff to enjoy together, and as a result each class had a real feast to enjoy. On behalf of the school I wish to thank all of our families for their support of this event. It might interest you to know that Amsleigh Park has more than 25 different nationalities and we are all very proud of our diversity. Harmony is certainly alive and well at our school! 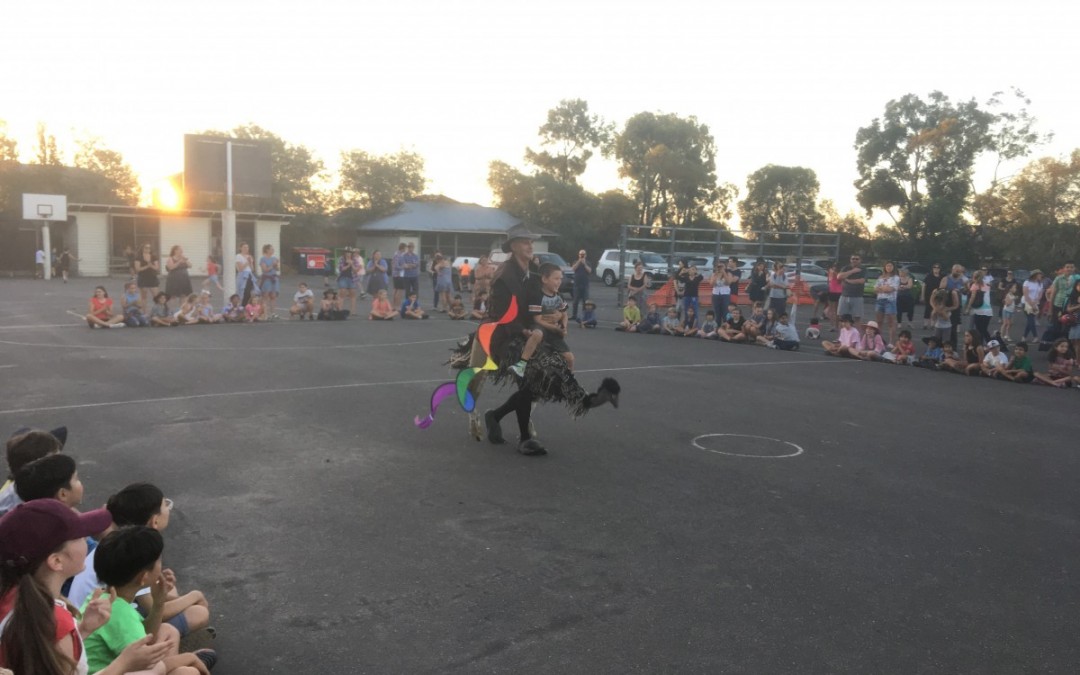 Our school community enjoyed a fantastic night of entertainment at this year’s bush dance. The entertainment was provided by the always popular bush band, Blackberry Jam, and included lots of the ‘bush dance’ favourites, as well as some whip cracking and a visit by Emily the Emu. We were absolutely thrilled to see the large crowd in attendance on this beautiful autumn night, and it was delightful to see our students, parents and staff having so much fun. Many thanks to the PFA and the Grade 6 families who provided the sausage sizzle. Just before they left, the band let me know how fantastic our students were and we should be very proud. We know it’s true but we still love hearing it! 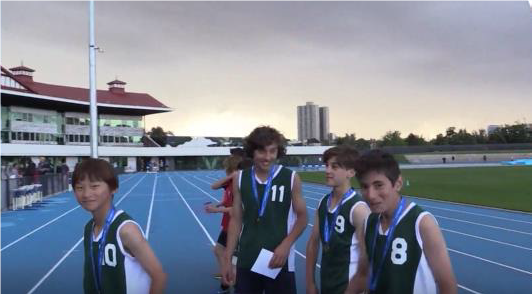 Our very own Amsleigh Park Primary School U12/13 boys relay team are the State champions for 2017! Winning their way through the many stages of competition during 2017, our boys ran an amazing race today. Min Hyeok got us off to a flying start, passing the baton to Xander who held our position well along the back straight. Nick then kept up the momentum around the last bend with Amsleigh in second place coming into the final leg. Our final runner, Lachie was outstanding, coming from 5m back to storm home for a memorable win. This State Championship win caps off what has been one of our most successful years of sporting success, and these four boys in particular have played a big role in this. Special mention to Lachie who also won bronze in the U12/13 boys 100m today, making it an especially great day for him. It’s another great memory for the history books! Go Amsleigh Park we are so proud of you!

The Amsleigh Park Soccer team 2017 wrote themselves into our history books today with an amazing day at the Victorian primary schools soccer finals. After winning their way through district, then division, then region it all came down to the final eight teams from Victoria. Our mighty soccer team won three games against very good sides in the round robin section, progressing onto the State final against Cardinia International School from Geelong. The final was tense and every skill was on show as the two evenly matched teams battled it out. At full time, the score was 1-1, so the game went into extra time, and, after a wonderful strike from Xander in the dying seconds, the score was 2-2. Finally, the game was to be decided on penalty shootout, and despite our valiant efforts, we were ‘Runner Up’ in 2017. I could not have felt prouder of our team and I want to congratulate them on this outstanding effort. In all my thirty years in Education, it is the only team that I ever had make an actual State final in a team sport. The chance of getting all the way to end is like winning a Gold medal in the Olympics, only on this occasion we took Silver, so let’s celebrate this great success, it’s one for the history books indeed! 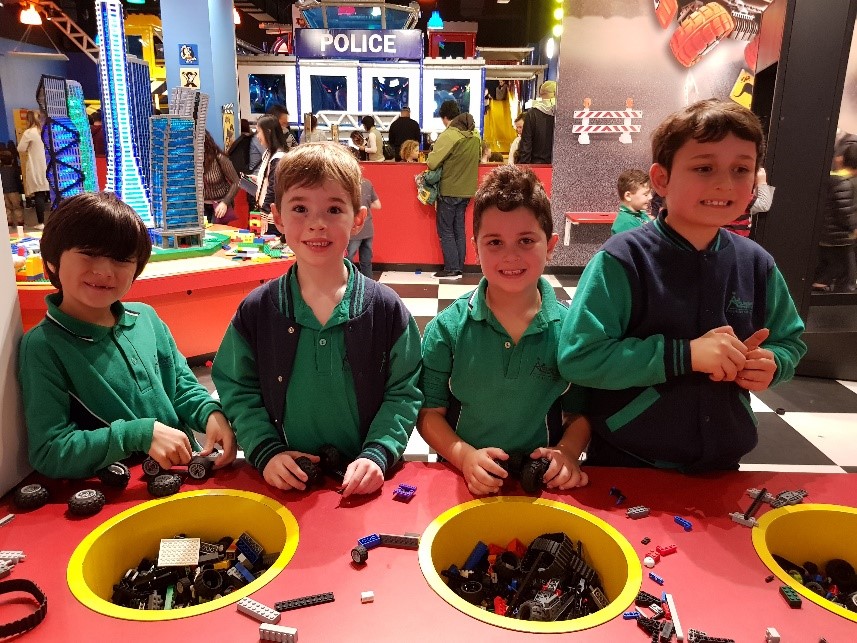 Having Fun and Learning at Legoland

Making, playing, riding and zapping. These were just some of the exciting activities our very excited Grade 1 and 2 students completed on their recent excursion to the land of all lands, LEGOLAND. Students were required to put their knowledge of gears and forces to good use in the workshop, where they had to build an object that moved using gears. There were friction battles on the car ramp, where many races were won and lost in the pursuit of having the fastest Lego car. There were also some squeals of delight from students and teachers alike on the playground and the rides. In all, students had an exciting, educational and exhausting day learning about how things move. 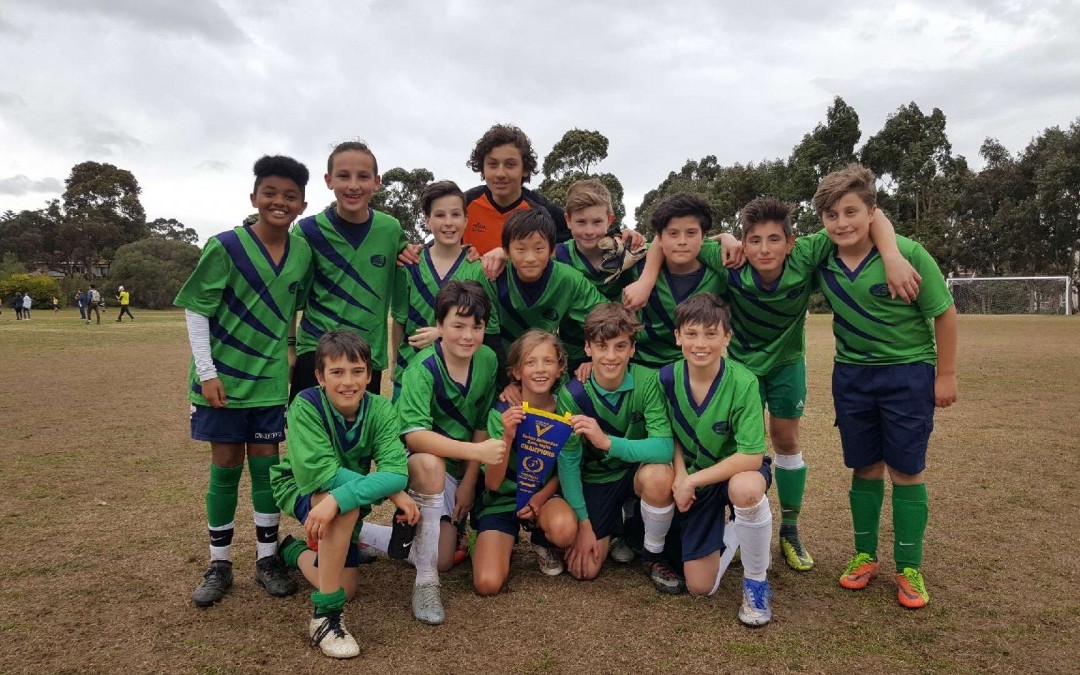 With a stirring victory in today’s regional soccer grand final, our boys’ soccer team are the regional champions for 2017. Today’s competition involved three close and competitive games, and through great resilience, sportsmanship and determination our boys were deserving winners on the day. This team will now play off in the State Championships and we all feel exceptionally proud of this great achievement. Only eight teams remain, four from metro and four from regional areas, so this in itself is an outstanding result. We look forward to the State finals in September. Our sincere congratulations to our team for their efforts; thanks Mrs Jonga for coaching and supporting the team. 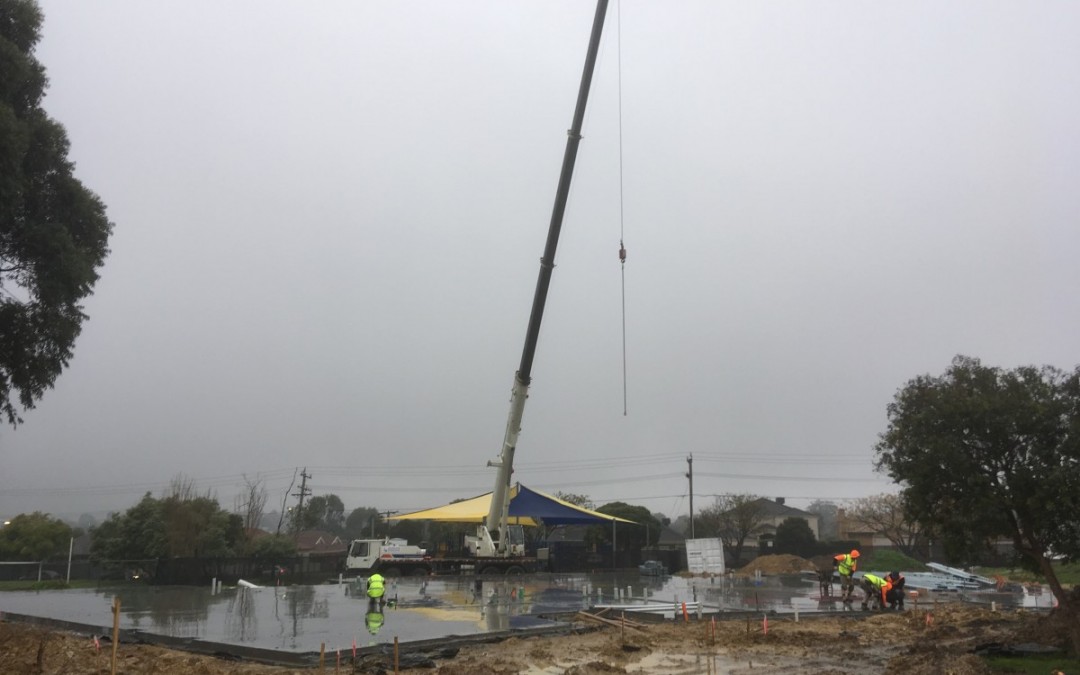 Anyone who loves watching a huge piece of construction machinery will be very excited today with a huge crane working at Amsleigh park! Our builder, Newton Manor, have now started on the next exciting phase of construction for our Junior Learning Centre. Over the next couple of days we should start to see the building take shape, and within a week or so we should have a completed steel frame. Things should to move along nicely from here!